I have been moving ahead with style and I need to go back and really nail the story down.

What is my film about?

It’s about a guy from the lowest echelons of a future dystopian industrial prison-like society that is controlled through propaganda and an ominous militaristic autonomous police force. An aggressively positive government mouthpiece features prominently on the tv (and throughout the world) and reminds the populace they can sign up to fight in ‘the arena’ for the chance to win a ticket to paradise.

The story follows the main character (Pinkguy) as he decides to risk his life and wellbeing by entering televised fights for a chance to escape his unfortunate, meaningless reality and get into an idyllic paradise that has been dangled in front of his face which he believes will solve all his problems.

The fights are operated by players who take control of the fighters using special futuristic virtual reality equipment. It’s just a game to them – but life or death for the likes of Pinkguy. His player wins the fight which is widely televised and enjoyed by a large audience – and is faced with the brutal reality of what he will do for the chance at paradise.

The question at the heart of the story:

Pinkguy is basically trapped in this terrible depressing life – and perhaps he should be more thankful for what he has, although apparently gloomy and bleak (representing his outlook) it could probably be worse. But as he sees on tv it could be better – it could be paradise. The whole story is about him trying to get to this idealistic world, and the depths that he will stoop to in order to achieve it. He is willing to corrupt his innocence and delve into the unknown to get the bright shiny existence he feels he deserves.

So the main question driving the story is:

The answer I have so far is probably not – or yes, but it’s not what he thinks it is.

What does the audience need to know?

– He is given a chance to escape his life by fighting

Turning point – He decides to enter a fight

(Pinkguy wakes up in his room)

Act one – Raise the question: Will Pinkguy win his ticket to paradise/escape his reality?

Act two – Yes it looks like he will. (He goes to enter a fight)

No it looks like he wont. (Players control the fights)

Yes it looks like he will (Pinkguy is winning)

No it looks like he won’t (his opponent is winning)

Yes it looks like he will. (He wins the fight)

I have a few ideas about how to end the story.

I like the idea of his mind being wiped and ending up back where he was at the beginning – so he can be convinced to fight again.

With this ending would other characters not recognise him and uncover the scam?

When fighting they wear masks – which you would think is just part of the ‘act’ or fight scene – like how wrestlers wear costumes and things – but really it is to conceal their identities so even they couldnt recognise themselves or the scam.

This would also make the characters look more visually interesting and create some more diversity – as I want to keep this running theme of everything being very ordered and repetitive. The buildings where Pinkguy is from look the same, every block is repeated. I want to use symmetry and square shapes/vertical lines during these shots. The other characters where Pinkguy is from could all move and look the same.

I don’t want to rely on english to get the information across. I can still tell the same story by using a gibberish language. It would then be accessible to all audiences, instead of only an english speaking audience. I have to make sure there is enough information for audiences to allude to what is going on, and be able to discern what is happening if they think about it – perhaps it’s somewhat ambiguous?

When it is revealed Pinkguy has almost definitely killed his opponent he is supposed to be regretful and shocked and remorseful. Does that mean he didn’t know that was a possibility? Not necessarily. Perhaps he just never considered the outcome properly – which happens to everyone with various endeavors – we like to fantasize about the positive (winning the lottery) rather than the negative (wasting all our money).

I think the audience might think he should have known better – if the fights are televised surely he has watched them before – but maybe we never show them being televised in Pinkguy’s world – only to this ‘other’ population (the consumers/players). Maybe in Pinkguy’s world the fights are edited to show the winner and the loser is never shown again – so they never get to think about the loser and the consequences for too long.

The fighters all come from Pinkguy’s world, and they are simply coerced and convinced by the adverts to fight, and continue fighting until they lose (are killer). The players need fighters so that they can play the game.

Who created the fights?

The fights are big business. They are televised to a big audience which costs money (infrastructure, etc). The players could pay to play the game – so that could be the motive – money. It’s a business enterprise. This could be by a mysterious company or the mysterious government – the distinction is never made – it is just a mysterious entity. (With an overly-positive figurehead, also a logo?)

The creators are mysterious and we don’t know if its a government implementation – like the Roman emperor putting on games in the colosseum, or if it is a company who has set this up with the sole purpose of making money. Greed and/or control are the reasons for the fights. If government it’s about both, and if a company it’s mostly greed, either way the outcome is the same – and this huge population are utilised as fighters with no opposition. It’s a streamlined system – there is no shortage of fighters alluded to. The fighters are not forced at gunpoint, but they are heavily policed (alluded to in environment design and e.g tanks rolling around) and they are coerced via marketing and advertising to join the fights. They know their lives could be better – they see it on TV all the time – this paradise they could have. The only way to paradise is to conform and enter the fights. 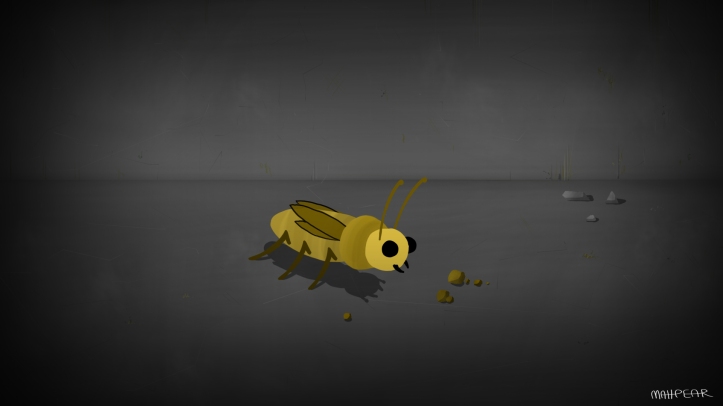 The bugs were both just quick sketches because I hadn’t drawn anything all day – and i’m not too keen on either of them. I think this bugs colours are too similar to the background – and should follow the style of Pinkguy and the other characters as bright contrasting colours.

Background with no vignette:

We can hear the TV and other sounds fade in

POV eyes opening – blurry at first – we see a TV screen – it is sideways as the character (Pinkguy) is laying down on their side.

Pinkguy hazily wakes up and rubs his head – sitting upright

We see that Pinkguy is in a sparsely filled room with concrete walls and floors with pipes jutting out of them.

Pinkguy is watching intently. The floating head is back on screen and we cut between a close up of its eyes and Pinkguys eyes.

The room Pinkguy was in is empty, the TV is still playing.

Pinkguy is in a hallway, waiting for the elevator. The hallways is the same concrete walls, floors and ceiling. The elevator arrives on the 13th floor. Pinkguy gets in and hesitates before he presses the button for the ground floor. (There is elevator music reminiscent of a classic video games music)

Isometric view of Pinkguy in the elevator.

Close up of Pinkguys hands – they are red.

We see a cityscape – isometric view.

From the top of a building, we pan down to street level and see Pinkguy exit through a door.

He walks down the street and we see the city – high walls, concrete, a tank rolling past, and a uniformity to the imposing skyscrapers.

Pinkguy walks down into the subway. There are posters on the walls – they are animated – we see the logo from the TV on a Paradise backdrop – and the floating head repeating some gibberish through a speaker.

Pinkguy waits for a train. Close up of his face – looking worried.

Pinkguy is on the train.

He stares at himself in the reflection of the windows.

Close up of his face as he closes his eyes and paradise fades in with accompanying sounds.

The same gibberish graphics, logo, and floating head dance around the screen.

The logo is in the same place on screen – now on the side of a building.

Low-angle shot of the building towering over Pinkguy standing outside.

One-point perspective as he walks to the door.

Door opens and a character walks in. They are in shadow.

There is a screen in front of them – the floating head is there and some instructions on screen which they follow – they are fitted with armbands, and a visor by robot arms.

The character looks like Pinkguy. He shadow boxes the air.

Pinkguy enters a room. It is dark. The same instructional screen is there but the room is darker and less clean than the grid room.

Spotlight appears on Pinkguy who shields his eyes. He is wearing a mask and bands around his arms and legs.

There is another Pinkguy opposite him that looks the same.

The lights come on and they are in an arena – with cameras around it and the floating head appears.

The fighters are ‘activated’ and lights around the arena indicate this – changing colour. The fighters both get into fighting stances and ready themselves.

The floating head says some gibberish (ready/fight) and the fight begins.

The action cuts between the grid room – where that character is doing the moves that Pinkguy is doing.

Pull back to reveal it is on a screen with an audience. Different shots of people watching the fight in different settings.

He celebrates and we see Pinkguy celebrate – but he looks horrified.

To see the opponent beaten to a pulp – dead and bloodied on the floor.

There is some gibberish from the floating head and the lights change back to their original colour and Pinkguy stops celebrating.

The player in the grid room still celebrates and punches the air. His instructional screen changes to a (gibberish) high score screen.

Pinkguy horrified in the arena. Looking at his trembling hands – with the dead body in front of him.

Pinkguy is back in the dark room.

The robot arms remove all the devices and mask and the screen changes to floating head and paradise. Pinkguy puts his hands on the screen and cries, falling to his knees. The image on screen glitches.

The room fills with gas and he falls unconscious.

We can hear the TV and other sounds fade in

POV eyes opening – blurry at first – we see a TV screen – it is sideways as the character (Pinkguy) is laying down on their side.

Pinkguy hazily wakes up and rubs his head – sitting upright