In a world where toons and people can mix, discuss the pros and cons of mixing the real with the unreal, and what tensions might occur in their narrative relationship from the point of view of the audience. Propose a project of your own that will blend live-action and animation.

Ok so my idea is about a guy who disturbs a sleeping demon spirit thing. The demon spirit follows him everywhere, as they are linked now. Until the guy can find a way to appease the demon and release it from the bond it’s formed with him he must go on an adventure to find out how to rid himself of this annoying demon spirit!

The demon spirit would be grumpy having been woken up by this clumsy guy, and neither are happy about the situation. Other people can see the demon spirit, so he cannot continue living his life as normal, and in fact, its perhaps dangerous for people to be around him now, because of the side effects of the demon spirit and its powers.

The demon spirit. A creature that belongs in another realm, but for whatever reason is stuck in the human realm. It’s really grumpy, and annoyed at being woken up. Although its not clear why it is here, it has been sleeping for a loooong time. Now it is linked to this guy and must go where he goes, instead of going back to sleep.

The guy. A normal, working guy. He lives an average life, goes to work and falls asleep in front of the Tv. He is the sort of character that seems really lost at the beginning of the movie, but after growing during the movie and going through the adventure, he is a new guy altogether and has changed and is more hopeful.

On the adventure we learn from a few different characters, who each have different idea of what the demon spirit is and how to get rid of it. Nothing works, and the guy is very unhappy and becomes hopeless. He finds wisdom and inspiration after he has all but given up and with determination he begins his journey to solve his problem. He does it on his own and makes his way to the sacred place. Only once he’s truly focused himself and had to overcome the trials of the adventure/journey can he reach the place where the demon spirit can be free.

What does the demon spirit look like? Well that changes. It looks small and kind of cute at times, and others it can grow and transform into something more scary and intimidating. It has the ability to transform during the movie but only does so many times – as it tries to make it more difficult for the guy to get rid of him. As it’s upset it was woken up and at how the guy treats it –  not with the immense respect it feels it deserves. So its a bit of a truckster that has a wicked sense of humour. The guy doesn;t find it funny, and at first he’s afraid, then annoyed, then desperate.

Some cartoony sketches of my imagined creature:

These are my initial designs for the demon spirit character – in its usual form. Although it can take on other shapes, and at the end when it is released it changes again into something better – truer and purer or whatever – as if it’s reached its desired ‘final’ form.

It’s very cartoony. I would actually like to follow cartoon characters in movies, like Roger Rabbit and the original Pete’s Dragon, rather than something too realistic – for now anyway. I really like the fact that there is a visual disconnect in some ways between the real and cartoon.

Lighting would be important for this creature, because i would want it to be glowing a little bit. So when its in an environment or near someone, it would shine light and affect them. This could be achieved with an actual light when shooting  the live action stuff. I would like each spirit at the end to shine different light colours and affect the scene that way. When the spirit gets angry it could change colour a bit (red for hot, blue for cold, etc).

It would be able to interact with the world in a few different ways. The spirit eats all the food the guy has, tearing apart the kitchen. When he goes to get some food from a restaurant the demon begins wreaking it and the guy has to run away to stop the chaos! The spirit eats so much it grows a bit and ends up lying down on the guys bed and crushing it, to the guys disappointment! 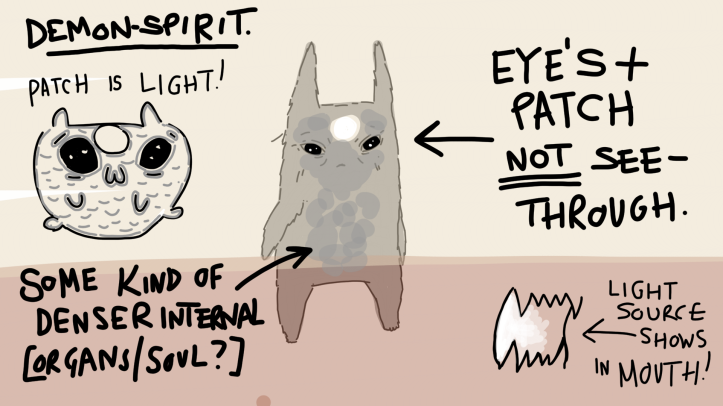 Some more ideas for my spirit!! 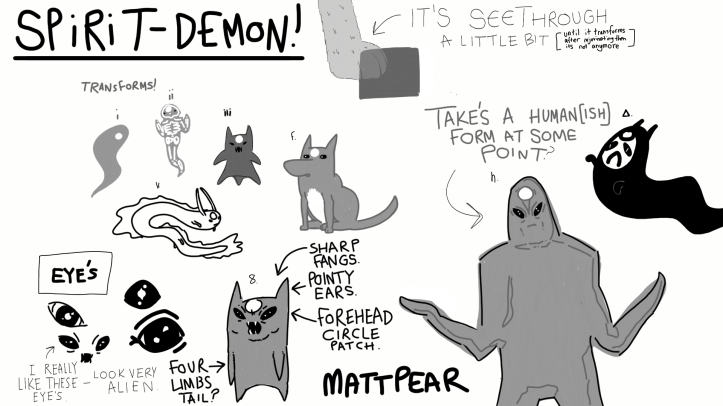 The demon spirit is basically a very rude and obnoxious uninvited guest that the guy has to deal with everything that comes with that – even though it begins tearing his life apart. Similarly like Roger Rabbit comes into Bob Hoskins characters life and causes all sorts of zany difficulties! The demon spirit is like a misbehaving puppy dog that can suddenly turn into a fire breathing wolf that could and will rip your face off!

The guy must overcome these problems and find a way to help the creature that is ruining his life. The only way things will get better for either of them is if he can be compassionate and think clearly when faced with all these crazy things! 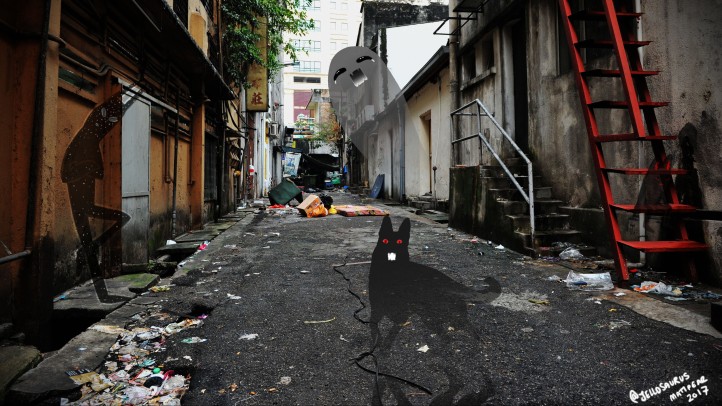