Today in class we talked about title sequences.

Whenever i think of title sequences The good, the bad and the ugly by Director Sergio Leone always comes to mind, as such an iconic film and sequence (and its animated!)

It looks to me like Quentin Tarantino got a lot of inspiration for his own style of film making and titles from the good the bad and the ugly- from the music to the font and way the characters and actors names are portrayed. It really is a very iconic film, set in the wild west featuring bounty hunters and outlaws and gun fights, the story is dramatic and everything is so huge. Part of the classic spaghetti western trilogy it has always stood out for being a great piece of film making.

Opening credits to a Movie should a spectacle of sorts, they should be engaging and get the audience ready for the film, setting the tone and mood in some way.

Originally title credits would show all the crew and everyone involved in the film at the beginning of the movie, but this changed to mostly everyone’s names appearing in the credits after the feature, and has since stayed that way more or less.

For my animation I would just need something to set the scene – to set up the world that the audience is about to be experiencing. Although i like the idea of immediately dropping the audience into the film and doing credits at the end. Although if i were to do opening credits i have an idea for one:

I’ve not abandoned my original idea, but i thought i would post the other ideas I’ve been playing around with anyway. As usual I’ve spent far too long in the ideas stage instead of moving quickly into animating.

I’ve written a script involving more characters (who don’t move a lot as they are all in the fruit bowl together) who are in a sort of support session. They are all complaining about various and apple is trying very hard to mediate them all. It gets out of control but cherry ends up getting his wish and overcoming the obstacle of being stuck in the fruit bowl when melon goes crazy and throws him out. This time there is no collusion, the cherry just says he would leave if he could, and implies that he is stuck waiting to die with the rest of them a couple of times. The melon interacts with the cherry when he throws him out and the cherry flies over and lands on the counter. The story ends here, with the characters voices still heard from the bowl as the audience sees what cherry sees – the whole kitchen around him – and his reaction to his sudden escape from the bowl. I decided the brief is met in so far as two characters interact and overcome an obstacle. Or at least one of them does, but maybe melon has a mental breakthrough as well? 😛 There is dialogue, and this time from a few different characters, so more varied and funny voices and personalities coming together – although more challenging. I want to try and have multiple characters and a bit of talking over each other and try a few different things to get to grips with cartoon 2D dialogue animation better.

Currently the script is running over a minute, about 1:30 on average. When cutting the audio together after recording i will have to see how long it ends up, but its going to be longer than a minute.. As a lot of the shots are simply characters mid/close up shots and dialogue. Only having the melon and cherry really move around. And one of them might use their hands a lot when they talk, but i will have to keep it fairly streamlined and simple, especially as i’m finalising my story and audio this week and need to begin animating asap.

apple – Dennis makes a very reasonable point, anyone have anything they would like to contribute?

orange – Oyy not this again, Session after session always with the dying!

cherry – Where is everyone then? Where’s Sharon? Wheres Peartrice? Where is Granny Smith dammit?!

apple – ok guys i think we’re going a bit off topic, Dennis was saying how he thinks…

banana – You think you’ve got problems? I’m no where near as appealing as i used to be.

orange- Yeesh insecurities! I should’ve stayed In the old country! These people are crazy!

orange- If you don’t like it here why don’t you leave!

apple – …getting a little bit…

cherry – Great! i wish i could!

apple – …out of control…

melon – If i was taken nobody would notice!

cherry – You know what? Anywhere is probably better than here!

banana – So you’re saying you want to split?

cherry – we all need to leave!!

{Melon gets up walks across fruit bowl}

{Melon picks up cherry and throws him out of the bowl}

melon – i;m sorry! i don’t realise my own strength! is it ok? cherry?!

Orange – All this commotion, what a world we live in! 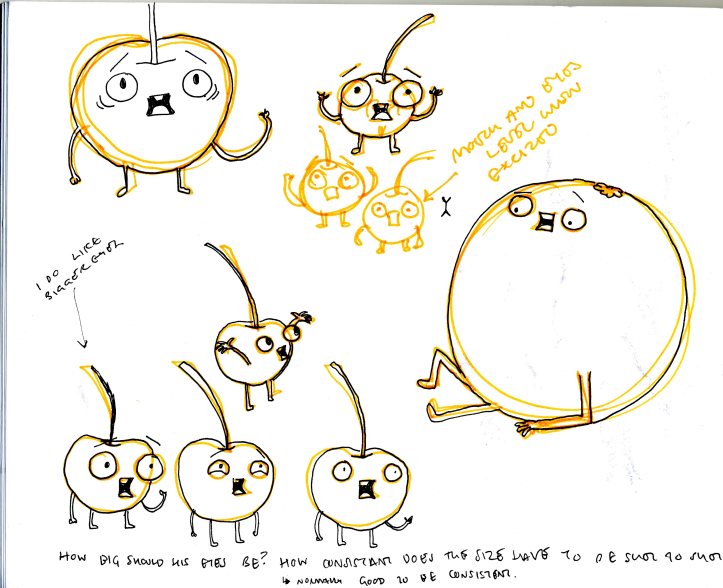 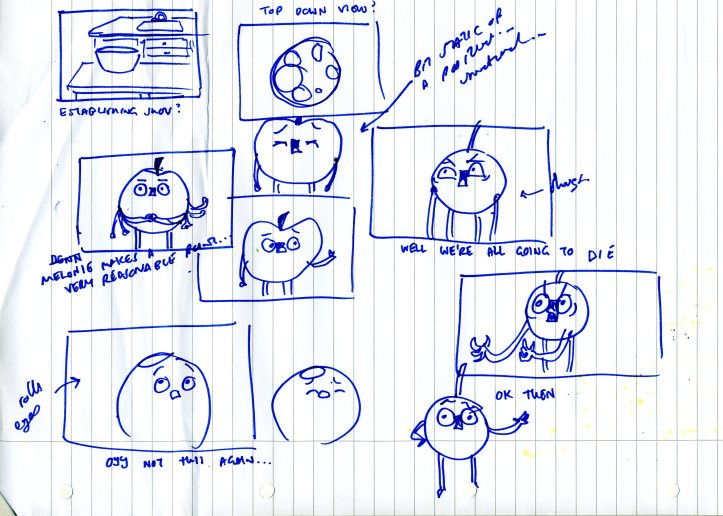 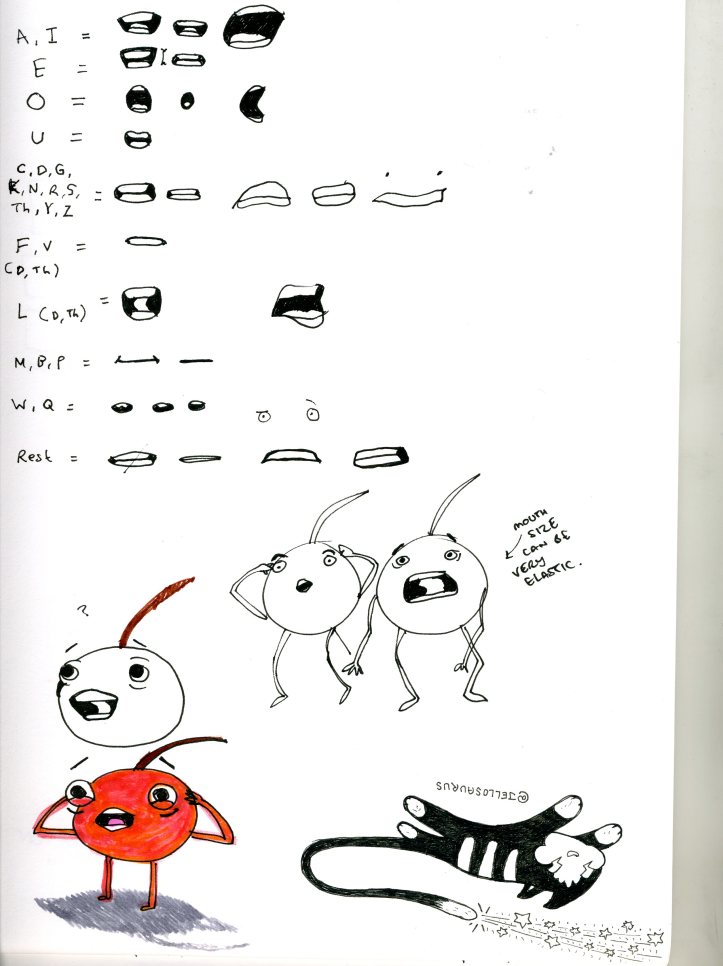 I really like the extended cast and all the other characters, but i don’t think the dialogue is really that good after recording the voices. It’s not the worst, but it need work and I don’t really have time to develop it at this point so it’s not going to go anywhere, but i thought i would post it anyway. 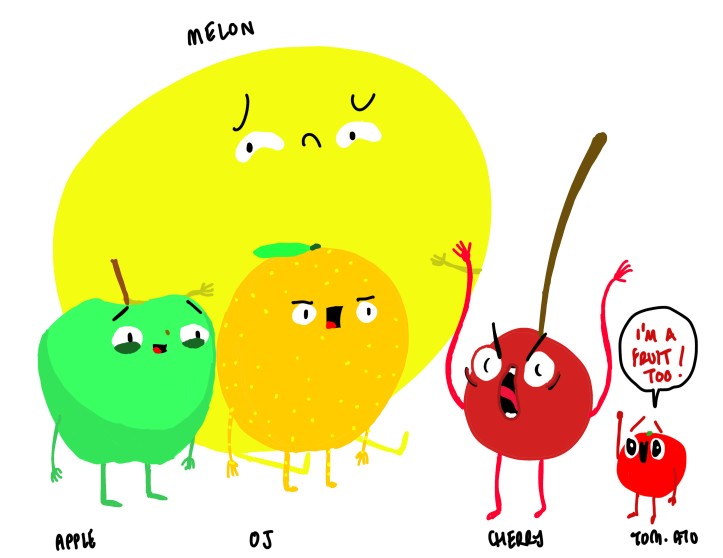 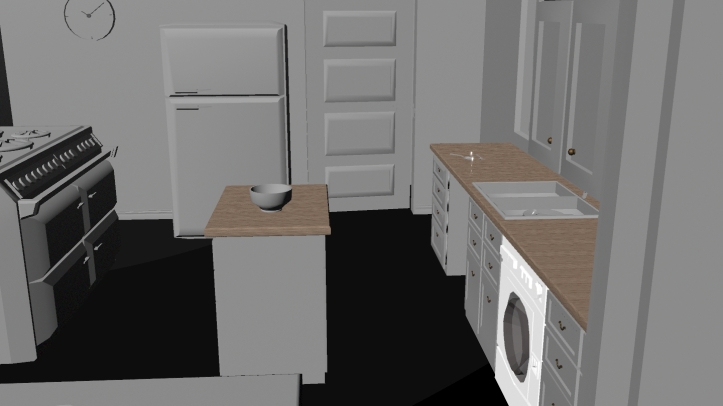 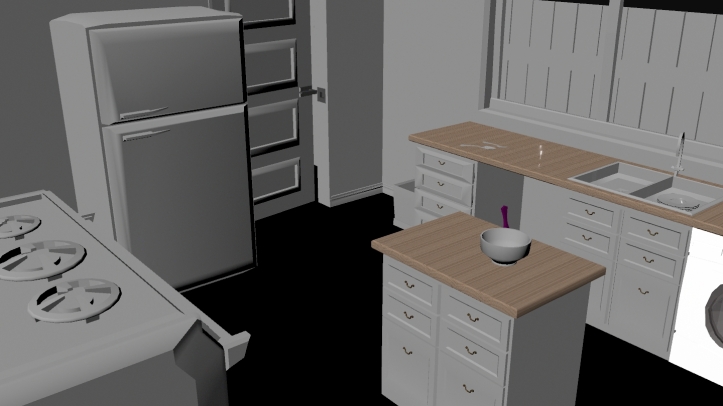 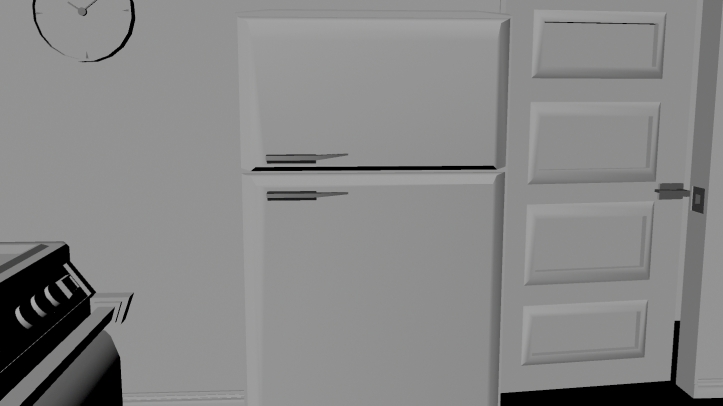 I haven’t got all the materials exactly as i want them yet, but these shots show some development to the kitchen anyway. I tried to make everything realistic, but my modelling still looks a bit simplistic and cartoony – which i actually don’t think is the worst style for this animation, it kind of fits with the cartoon characters inhabiting the scene. 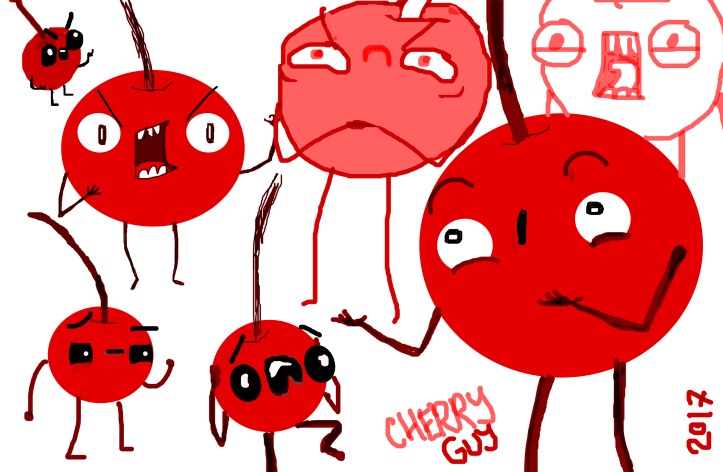 These are basically the final character designs i’m going to be animating with, although i actually really like the slightly more dishevelled and rough looks where the shapes are not perfect, so i might actually mess them up a bit when animating and make them less perfect and round. I decided to try and differ the design styles of the two characters here, although i’m still not sure i’m going to go with the black eyes on the cherry. The arms and legs are different colours, and thin. There will be very little body movement throughout the animation, so emotion and everything will be found in the facial movements. 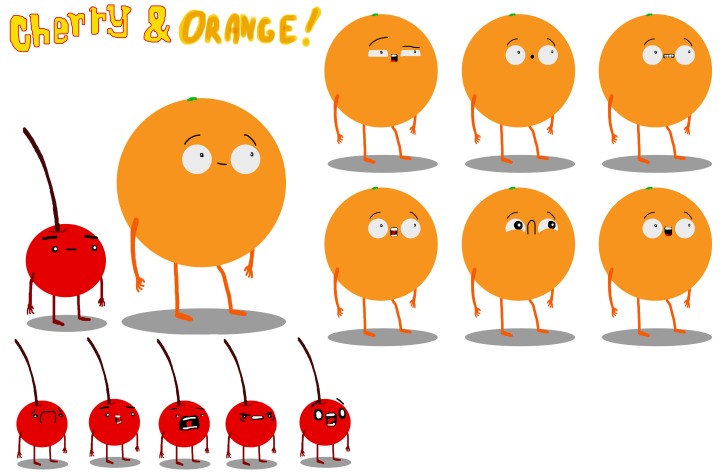 I’ve probably posted the above video before,  but it’s always a good place to start when thinking about animating dialogue. I really like the characters style and its interesting to note that we see the mouth shapes before we hear the words by a little bit. The mouth movement can precede the sound. I’ve only animated a little dialogue roughly and been experimenting a bit, but it’s a lot of fun to make the animated characters look like they’re talking!!

They may be puppets, but its important to remember that they really do look like they are talking. They are pros at hitting the accents and making the speech seem believable using the puppets body movements as well.

The above video is a Ross Plaskow tutorial video of sorts. He has a lot of blue peter here’s one i prepared earlier stuff but the overview for After Effects is actually really good and he looks at dialogue as well a little bit. He has a few really good videos that i highly recommend checking out when you get a chance, and for anything not covered in this video there is another with the information. (Although for some reason i can’t find the first part to this video… So below is another that is pretty good for dialogue, Ross doesn’t have that many videos, seriously just go binge his meat mysteries stuff at least its Amazing!)

The video above is actually fantastic. Ross talks about and shows how he animates dialogue. He draws the mouths and sets them up so he can just slot them into his After Effects animation. He uses eight mouths in total, they are:

You might have to do another set of mouth shapes if the character is seen from a very different angle that required that, but these eight mouths will be all that’s needed for the character to talk. You can get away with less mouth shapes, but eight is probably a good base amount, although in Aarons style (video above) the mouth shapes are more natural and will almost never look exactly the same frame to frame. Ross’s style is great once you’ve set everything up, because you can just slot them in where appropriate. When I’ve been experimenting with animating dialogue i really like trying to use some more unusual mouth shapes to see what works, especially when the characters dialogue is getting more dramatic or emotional.

Everyone starts with a blank sheet/screen. DON’T PANIC! Planning is everything.

I’ m including this because i watched it and it does have some good stuff in there. He reminds the audience that when animating, planning your animation is everything. He says you should act out the poses, then draw the poses over and over, experiment. He goes through the dialogue he’s going to be animating and underlines the accents and marks parts of the dialogue for upwards inflections etc. Then he knows the frame no. and can be meticulous with all the different shots that go into making a finished animation.

Remember body language. It communicates more than words. Our poses should show what the character is thinking or feeling.

You just need to know what your poses are, so that the final character acting is strong and looks natural. I was a bit all over the place with my planning for this project. I wanted to do a lot of different things,and then wasn’t too sure of where i wanted to go with it. In the end i had a few different ideas and storyboards and poses and it was a bit more confusing than it needed to be. After i finalised my idea and then finalised it again, i was able to crack on. I should have sought more feedback on my poses, its something i probably didn’t worry about enough and although i was thinking about cinematography and everything, poses were decided and not something i thought about too much because the animation is really pretty simple  probably a bit too simple really when it comes to the finished poses.

Might as well throw in a Draw with Jazza. He draws the mouth shapes like Ross Plaskow, ready to be inserted later – but a little differently. MAKE SURE TO SAVE! Jazza has frames that lead into the mouth shapes, so he ends up with more mouth shapes to work with later and the dialogue should look smoother. It all comes down to style choice in the end.