This project is to:

Create a conflicted character, where what they say and what they think and feel differs wildly. Using body language and facial expression to communicate one thing whilst language and speech says something else.

So i have chosen to do a story about an alien who isn’t very good at his job. He doesn’t have the best attitude about it either, he doesn’t really care about what people think. So he’s sarcastic. To fulfill the part about his body language and speech being different to what he is saying i thought sarcasm was a great fit. The audience and the person he’s speaking to both realise he does not mean it, the sarcasm is meant to be clear to everyone- maybe with some progression to the tone of the sarcasm – becoming more obvious he is not being serious with his response.

Here are some pages from my notebook that i made about this character and the story i am  trying to tell with him.

Outline – An alien (A) goes to see alien (B), to check he has done his job right, because last time he didn’t do his job right it was not good! (A) asks (B) if he has done his job this time and (B) responds annoyed that he did the job (ok get off my back man!) and when alien (B) pushes for a more definitive response he is sarcastic and lets all his feelings out in that moment. (B) treats  (A) like he is always showing up bothering him – and he only screwed up once so its not fair!! But as it turns out (B) did forget and ends up feeling silly and embarrassed for being so confident this time.

This will allow me to animate the character in a few different feelings (annoyed, impatient, angry, embarrassed, nervous) – which should show that he is a conflicted character who would like to tell the other alien to ‘swearword’ off!! It’s not that this character is flawlessly hiding his emotions or feelings, but trying not to let them out completely – which is hiding his true feelings. 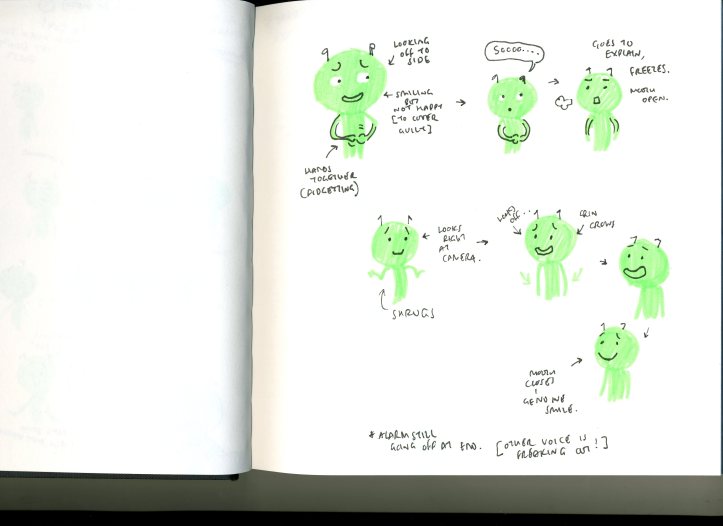 What he means – I don’t care about your stupid job just stop bothering me! (he is very forgetful and also pretty grumpy and lazy so..)

*I actually really like the robot bit, but i don’t know that i will use it in the final animation. 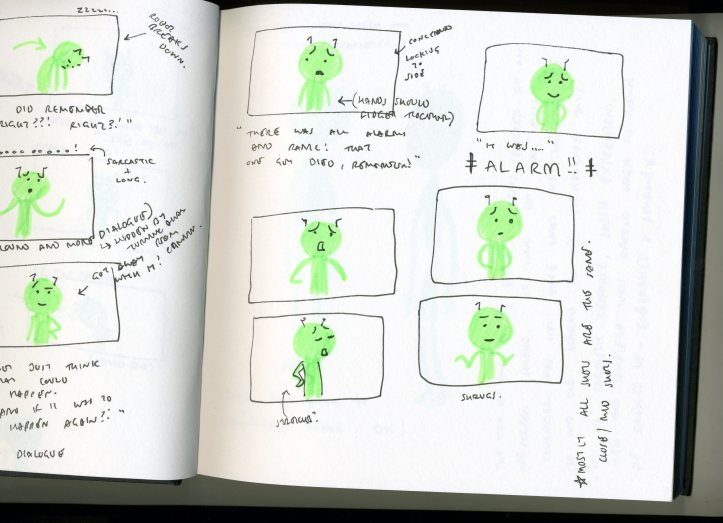 A – ‘Hey my alien friend!! How is it today with you today? I am enjoying speaking as the humans do my good-friend!!’

B – *not enthused to see alien A. Rolls his eyes at him as he speaks human but smiles meekly at him.

A – ‘So my fellow alien chum-bob, did you make sure to do your job-employment today?’

B – *nods and maybe a small quiet gruff annoyed yes.

B – ‘Noooooooo’ (big and over the top sarcastic no).

A – ‘Hey! My friend i think maybe you are not so very serious about your job-role today? Perhaps you would like some oranges to feel more appropriate for living? Last time it was your job-reason to get the humans back to earth-ground after abducto-probe, and you-hoo forgooo-ot! (B = hands on hips and annoyed expression here) But of course, you did it today, Affirmative my fellow alien buddy-pal?’

B – *clearly annoyed. through gritted teeth – ‘Of course. How could i forget.’

A – ‘Remember how the humans got free into the glooby-dooby? woohoohoo! We were cleaning that mess up for.. ohhh.. a long time i think huh?’

A – ‘Hmm. Perhaps i am remembering it differently to you, but i am satisfied-happy that you have done the work-job so i will say goodbye to you today buddy-friend.’

B – *smiles really wide and eyes closed. ‘ok great thanks’

A – ‘Well, keep up all the good-great work you are uhhhhhhhhh…’

B – *reacts to the alarm by being embarrassed, shocked and at the same time he’s totally not surprised because he knows he didnt do the job..

A – *still going: ‘uhhhhhhhhh..’ in the background.

(I have written the sideways writing from my sketchbook in the picture above here:)

THE IDEA IS THIS STRANGE LITTLE GUY GETS QUIZZED BY AN OFF-SCREEN FRIEND. IT TURNS OUT THAT THIS CHARACTER HAS NOT DONE WHAT HE WAS SUPPOSED TO AND ALARMS GO OFF SIGNALLING THIS. ITS HIS SARCASTIC RESPONSE, SASSY EXPRESSIONS, THEN THE COMPLETE TURNAROUND WHEN ITS SHOWN HE SCREWED UP – EMBARASSED + ASHAMED.

As you can see i have not completely finalised my idea into a finished working story – or at least i keep changing little things with every draft and iteration, which is a problem i seriously need to get over – i keep taking it into different directions instead of just making it work and going with something! However I am going to basically move forward with what i have at this point because i wont have enough time to animate if i don’t – and some of the changes i want to make are cosmetic and not really important. I am already right up against it with this project, and really need to take this as a lesson in time management and planning. At this point if i can get some scenes in and finished on time i’ll be happy. am not convinced by my idea in terms of a full interesting story for an audience, we’ll see anyway.. but i do think that it will allow me to show a character who is conflicted and feeling things- saying one thing but thinking and feeling another. So at least it gives me the opportunity to create something useful and show that i can animate a character that I’ve rigged together.

Having run over the initial deadline i have had another look at my idea and simplified it a bit. Basically a character behind the camera sees our alien friend and goes to say hello. The alien is not happy to see this character -they are too happy! – but they say nice things even though they look and sound like death! The below images make some more sense of this idea and i drafted a script: 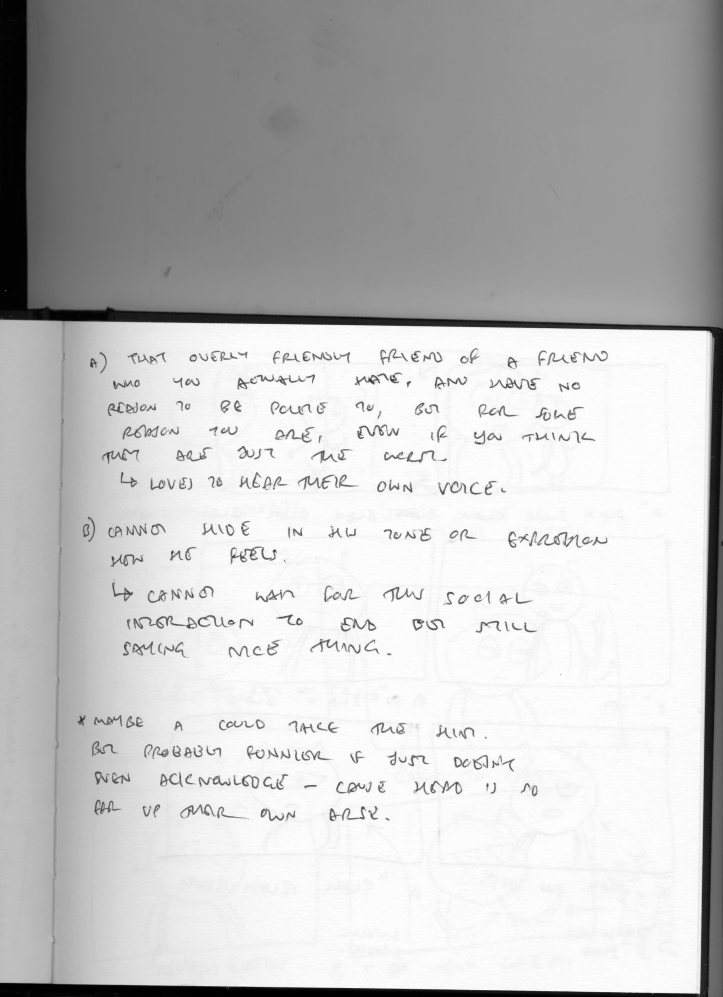 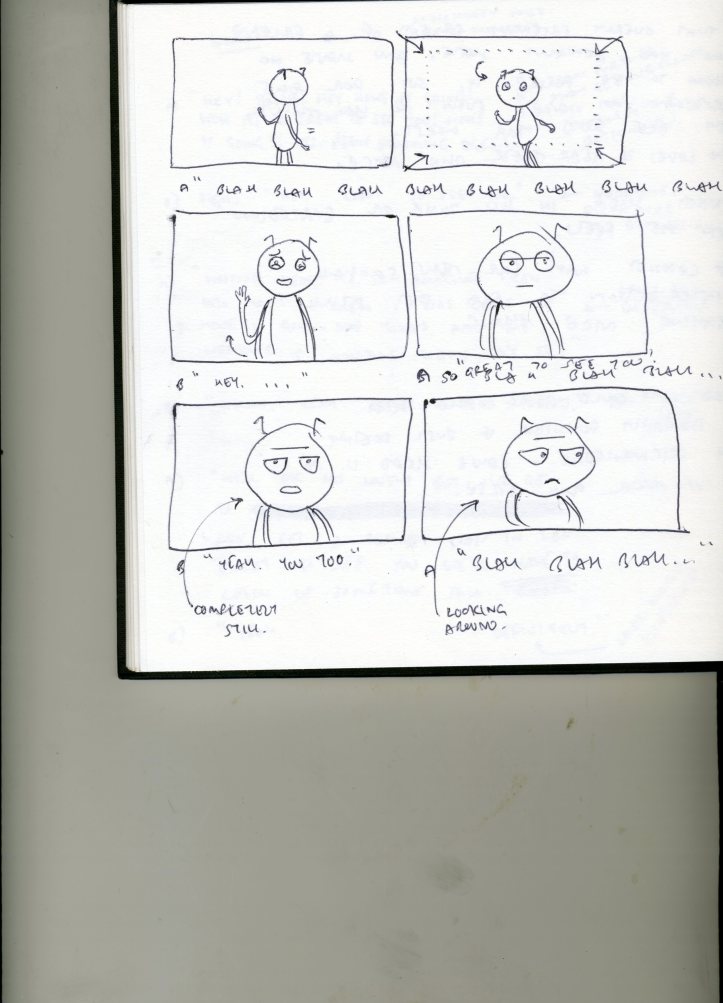