The Amazing world of Gumball was created by Ben Bocquelet for Cartoon Network, it is about a young cat (Gumball) and his fish brother (Darwin). But its not the story that interests me, it is the style, the design and the look of the animation. It is not your ordinary animated TV show..

This is one of the main reasons i have chosen this animators style, it is modern and cartoony – but it is also open to so much by using all kinds of animation and mediums, certain characters can reflect that, or certain worlds the characters enter into can. I like the realistic looking environments and the 2D and 3D characters together -the success of Gumball has shown that audiences (especially ones aimed at the same as Mr Benn age-wise) are not bothered by the contrasting styles. 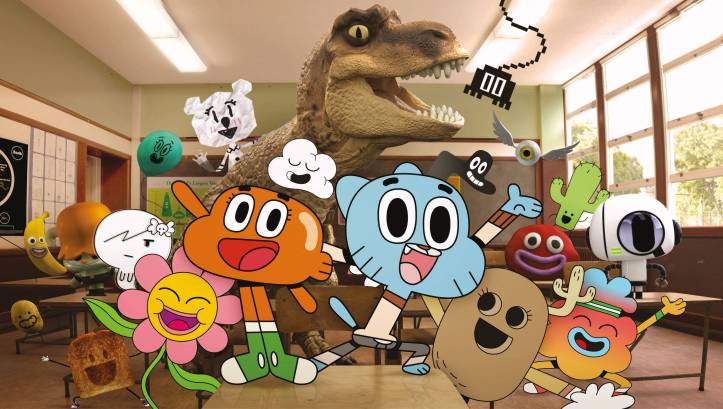 I am going to be rebooting Mr Benn, an English children’s television series from the 1970’s, about a man from London who visits a fancy dress shop each episode, and then he exits through a magic door which takes him on an adventure (which like most children’s TV shows contains a moral – a lesson to be learnt and remember by the audience). Mr Benn’s animation in the 1970’s was really simple, less moving pictures and just pictures with narration over the top, but i am taking the idea from Mr Benn and using the Animation styles from The Amazing world of Gumball.

The character design here is clearly very dated and in need to bringing up to date and making more visually appealing to audiences. Can he get away with still wearing a bowler hat in this day and age? I feel like he could, like James Bond or The Kingsman, they main character, the British gent; is so suave that he wears a bowler hat and suit when going to work, and he always carries a black umbrella. But he wears less formal attire when he is at home with the family.

The intro for the animated series of Mr Benn shows the street that he lives on with the terraced houses and really gives an idea of location and time. The story for the film would have to be a little bit different than the television series, obviously, as they are made for much shorter length and with very few main characters. The movie would also have to have some conflict, a little bit more drama than the old animated show ever had.

This has some really good examples of the reasons why i will be using Ben Bocquelet’s style, it just works so well, looks so good and i thin it would work really well for Mr Benn.

Mr Benn is the perfect early animated TV show to reboot and make a film out of. Although it doesn’t have a huge cult following or anything, plenty of people fondly remember Mr Benn  – and i believe the is good enough to stand alone from its history and be interesting to new audiences. Think about it – A character that visits a costume shop and can then travel on adventures to other magical worlds! It has a very Dr Who feel really, and i think a travelling companion for Mr Benn would be good for the film version.

David McKee (Mr Benn creator) was asked some questions about what it was like to go back and make another Mr Benn book..

Easy? Not completely. When we visit old friends after some years apart, we see how they have aged and it shows us how we have aged. Mr Benn doesn’t age, but I do. To revisit him was to go back in my head to that point in my life when I made the films. A bit like finding myself at that age again. I think it disturbed one or two things in my mind. I did it with pleasure but also with some fear. [3]

A film was proposed for Mr Benn again – although it sounds like it was made with a more mature audience in mind (trying to cash in on that nostalgia money – which is one way to go, but the main audience for Mr Benn are children, and i believe they are the audience that should be targeted with this movie reboot..

Plans for a live-action feature based on David McKee’s 1971 animated children’s favourite were announced in early 1999. John Hannah was slated to star as the besuited, bowler-hatted occupant of 52 Festive Road, while Ben Kingsley was due to play the owner of the fancy dress shop whose changing room was a portal to adventure. The storyline was to chronicle Mr Benn’s search for lost love Monica McBride (Jane Horrocks), in what director Jevon O’Neill called “one man’s journey to fulfil his potential”.

I will be specifically adapting the first ever Mr Benn story – Red Knight, this is the synopsis for that:

Mr Benn has a family now (unlike the source material) – a wife and two young kids (a boy and a girl) and he lives at 52 Festive road in London. Halloween is coming up and they are going to a big dress-up party, so they have to get some costumes, so Mr Benn takes his children to get some from a local costume shop that they drove by when they were lost the other day. Mrs Benn reminds Mr Benn that he must bring the children home in time for tea (I’m actually thinking about Hugh Laurie and Geena Davis, the parents in ‘Stuart Little’ when i think about their relationship dynamic and character).

The owner of the costume shop is a very strange man wearing a funny hat. The children try on costumes and  then go into the changing room and disappear – Mr Benn’s children are magically transported to another world and Mr Benn has to go after them even though he doesn’t fully understand the magic. Mr Benns is very worried for his children, but the shopkeeper is not so worried and explains it is a magic shop and when Mr Benn puts on costume he can travel to other worlds. Mr Benn is scared and annoyed (EMOTIONS) – did the shopkeeper put his children in danger? Mr Benn puts on a costume and goes after them! (The shop-owner is not evil – he just is mysterious and is allowing the characters to get into trouble and grow on their own  – so they learn a valuable lesson/ Mr Benn is spending too much time away from the family, working all the time (introduced at the beginning when he’s asked to go get costumes by the mom who is overrun and tired, he begrudgingly agrees, but over the course of the adventure he is closer to his kids and has a good relationship with them, he has also stopped caring about work more than anything and now his kids come first). This is the main lesson that he learns in the film.

He has to find his children, but hes just an ordinary working man? So he will have to step outside his comfort zone, for his family, which of course he will. The children were kidnapped and Mr Benn must rescue them, which he does – only when he has learnt his lesson does the shopkeeper magically return them back to the shop and congratulate them. They then leave without buying costumes, much closer and more together than they have ever been, they only want to go see mom and eat tea.

When Mr Benn finds himself in the fantasy land, there are dragons and magic. It turns out that the children have supposedly been kidnapped by a dragon, the same dragon that is destroying the kingdom – or so says the wizard. Mr Benn goes after the dragon alone, because all the bravest knights have disappeared when they went to fight it. Mr Benn is very scared and has to travel across the sea in a small boat, through a haunted forest where meets a funny ghost, and finally up the mountain to the dragons cave. He is ready to fight the dragon but learns that the dragon is not the problem, its the wizard! The dragon used to protect the kingdom but the wizard wanted the power for himself, Mr Benn finds all the knights that came for the dragon and his children and they go back to the castle on the dragons back to face the wizard. The wizard is powerful but they defeat him and he is thrown into jail. They hear a voice in the sky – the costume shopkeeper, and they find themselves transported back to the shop. The shopkeeper asks if they had a good time? Mr Benn just smiles and says he is sure they will be coming back soon for another adventure! The film ends with the family at home, all happier and together and lovely.

These days, my advice for anyone who wants to pitch scripts or ideas to studios is this:

Don’t pitch. Make it yourself then create an accompanying trans-media fan experience online. [8]

Pitching your idea is not always the easiest thing to do, for many different reasons, so planning and getting your pitch the way you want it is important. The quote above goes on to say you don’t make the whole thing, just enough, a short that introduces characters and stuff.

You are much more likely to get your project in front of an audience (and that audience would likely include industry folks) if you just make it yourself and get it out there.

I think this advice is great in theory, but pitching is not going to go away and sometimes we are pitching for things that we would not create on our own (business/corporate jobs etc).

As a fan of the Axe cop comics i knew it was discovered and are a big success story in part to their online following. The story is written by a kid and the comic artist and his kid brother sit down and come up with everything  then he draws it. Really if you make something, and then it becomes popular – you’re going to be onto a winner and its more likely a studio will produce it!

Something that should be remembered when writing the pitch is that the goal of every single screenplay and movie, novel, story, and ultimately every work of art is to elicit emotion from the audience. The art should move us emotionally in some way. When pitching you must provide the buyer with a positive emotional experience, and convince them that the story will create a bigger emotional response/experience. [9]

A list of key story elements that should be included in your pitch:

Character designs for Mr Benn and his children: 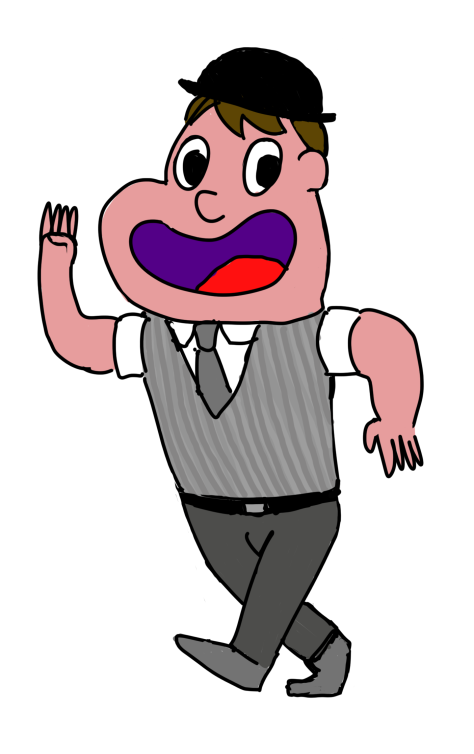