Here is the continued progression of my severed zombie arm that I’ve been sculpting in Maya. So far I’ve made a lot of mistakes and spent a lot of time trying to make the model look good, which ended up breaking the model a little bit.. 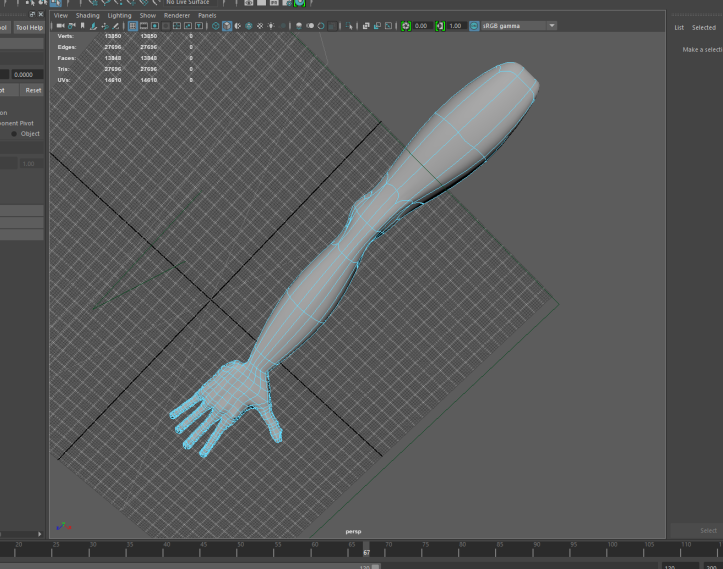 I did my best to fix it all and eventually got it looking like it was fixed, the UV editor was a bit misleading though.. (it wasn’t, I was sculpting in the smooth view and that was where I went wrong at first. And when switching between the smooth and original view the UV editor changed and the whole thing was all over the place. It was all a bit confusing for the longest time).

Well they’re not scaled correctly and actually there’s a bit of overlap even here, I really thought they looked fixed here..

Once the arm was completed in Maya (or so I thought..) i could take it into Mudbox and start painting it. You can also add texture and stuff, so I could add some little details and make the stump look more how I imagine it to look. Here’s what the arm looked like when i first sent it into Mudbox:

I painted a base coat and then made a new layer and painted the flesh colours onto the arm, I think I ended up merging the layers anyway though. Slightly lighter skin colour on the underside of the arm and the palm, I painted the fingernails as well and then did some pinks and reds on the stump.

I was able to make the stump look really scarred and much more realistic in Mudbox, although the problems I was having with the UV caught up with me and I decided that although I had a model which would work fine and look ok(ish), I was going to see if I could go back and fix the issue.

With a little help I was able to get the model more or less fixed, by deleting some parts and remodelling them.

Here’s what I did before I scrapped it and went back..

I added a couple of raised veins in the hand and some scars in various places over the arm, just to give it some more character and realism. 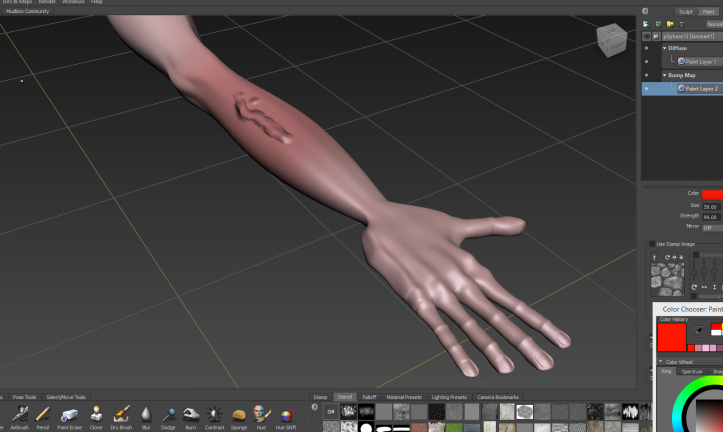 Here is the resculpted arm model after the whole fiasco I had today, I sent it to Mudbox and was able to sculpt this..

And I think it looks way better than the last one, I added the same kind of things; scars, veins and the bloody gnarly stump.

Today i spent a lot of time trying to figure out what was wrong with everything so I wasn’t able to progress as much as I wanted, but the arm (hopefully) works now and is ready to be painted and then rigged up for animating, then I just have to do the robot arm and the environment they are in and I can actually start animating!