Character design is the process of creating visual representation of character concepts or ideas defining visual style in a range of situations. It is also the process of exploring the back story and mind-set that combine to define the motivations and personality of a fictional character.

Task: Design a character in the style of a golden age illustrator/ cartoonist/ animator. Designing a character that thinks in order for an audience to emphasise with them is core to animation. Learning to design both the insides and the outsides of characters is an important skill.

A world with animal hybrids, meaning that the cast of characters would be a concoction of different species mixed together. For example: A bull/duck/human hybrid who has anger problems, which stems from the bull side, loves bread like crazy like a duck, but also mostly has a human body. Most of the intelligent characters would have human in there somewhere, so the audience can emphasise and connect with the characters a bit more, and also because its our world set in the future, where all humans have mutated with other animals and a whole new unrecognisable set of creatures walks the earth!

So the deputy is the character, juggling a complication double (triple?!) life, a helpful and kind person who is brave and intelligent, even if nobody realises it. 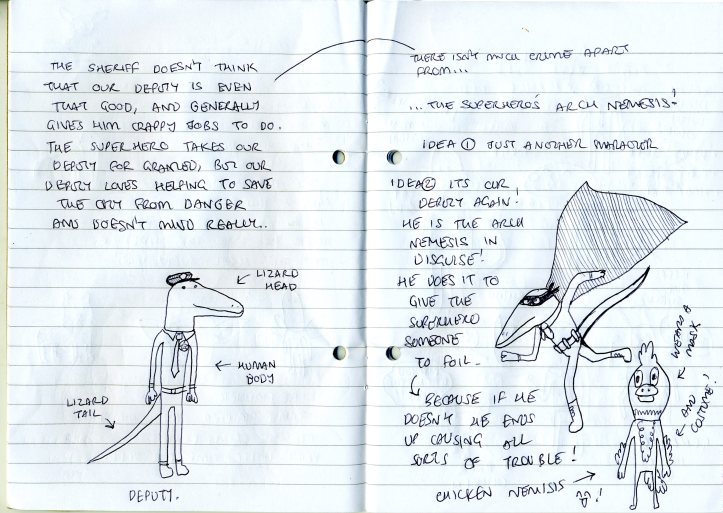 I like cat guy actually, he just seems cool..

If the characters live in a future world where different species have merged together, then they should also feature other mutations i think. I really like the three-eyed owl, maybe birds are the other intelligent species, so they are human sized but crossed between birds and another animal, eg: owl and pig/ pigeon and turtle/ penguin and horse?!

When devising The Simpsons, Matt Groening knew he had to offer the viewers something different. He reckoned that when viewers were flicking through TV channels and came across the show, the characters’ unusually bright yellow skin colour would grab their attention. [1]

When it comes to designing a character there are a lot of different things to think about, and a lot of questions you need to ask yourself and your character. Its not just about what they look like, its about who they are, the more you know about the character, the more it will inform the character design and the more real and well-rounded the character

This is the character that I am going to develop further and also I will be creating a 3D environment in Maya for the character as well (tying the alter ego project and the origins project together). 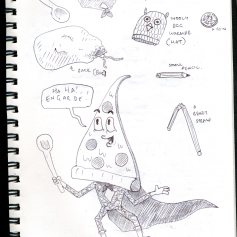 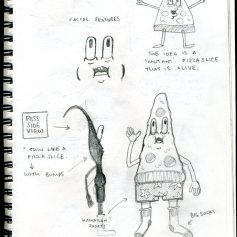 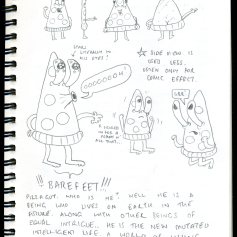 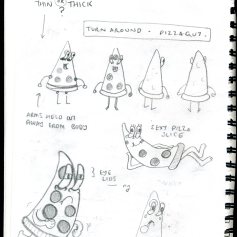 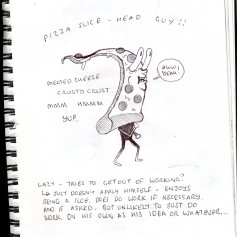 “The pizza bread man: “One whole year! Boy a whole year of being alive! crazy… It seems like maybe more stuff should have happened in that amount of time.. OK best thing about this year.. hmm.. So many great things happened this year, that time I ate all those grapes! Biggest achievement is definitely watching the entire series of friends from start to finish.. Or maybe when I got the high score on Pacman the 2nd: Revenge of the Wakka Wakka! that one time for five minutes before Mr. Tape recorder guy got a hold of it and broke the game..” sigh.. “I do wish that I got to spend more time with dad but at least I’ve got my brothers and sisters when dads off saving the world, maybe one day he will take me with him! I cant really complain, really I have everything I could want right here in the basement. We got a TV and dad even got us a video game system, even though I keep losing track of time and staying up playing Boogerman 3 until 6 in the morning! Mr. Half a banana is such a bad influence on me! I’m so lucky to have a dad that lets me do whatever I want and stay up super late, especially because I’m only one years old! He even lets me watch films that are waaaaaay too adult for me, sometimes Mr. Wellyboot jokes about them warping my tiny little mind, whatever that means! What a year though. OH MY GOD I JUST REALISED! Theres a very good chance that I will get another year.. WAIT A MINUTE!  How long do we live for? MR WELLYBOOT!?!?! HOW LONG DO WE LIVE FOR!?!?! OH MAN oh man! Ohh man… I wonder if I get to live forever… This is crazy.. MR WELLYBOOT!!? THIS IS CRAZY!!! CAN I LIVE FOREVER!!?? AAARGH! EEEEEEEEEEEEEEEEEE!! Oh man I had better go and tell Mr. Half a banana about this, the implications could be… they could be… errr.. well they could be something pretty big.. a pretty big deal probably anyway. What if we only live for a year? MY TIMES UP!!! AAAAAAAAARGH!!!! EVERYONE!! AM I ABOUT TO DIE”

Mr Wellyboot: “What is that damnable pizza slice screaming about this time..?”

Mr Wellyboot: “Do you want to explain this to me?”

The Pizza bread man: “I was just trying to have a little fun.. It wasn’t supposed to end up going so badly. Ooh Actually I remember thinking about what would Mr Wellyboot say about this before I even did anything, and I remember you said that there was almost no chance that anything could go wrong, so I don’t really see why you’re so mad, its actually kind of your fault, not to mention you know what happens when I’m left all alone for five minutes..”

Mr Wellyboot: “I was in the other room! You could have literally asked me!”

The Pizza Bread Man: “Abababababa. I think we both know how this is going to go don’t we. So maybe what do you say we cut out the middle man and just go and make some hot chocolate and popcorn and lets watch a film! I know that we wont be able to use the TV, because… rizzle razzle.. But of course we can always use our imagination! Which in some ways is better don’t you think, TV was getting a bit predictable anyway, imagination TV means that all the cartoons can be in one show together! oh man actually think about it. This is big.. This is actually awesome!! I never thought about it before but, oh man mind blown, all the best characters could be in one show together! This is LIFE CHANGING! MR WELLYBOOT HAVE YOU EVER THOUGHT ABOUT HIS BEFORE??? OH CRAP! sorry mind my Spanish, but HOLY MOLY! OK YOU GET THE POPCORN I’M GUNNA SIT HERE AND COME UP WITH THE SHOW! I cant believe I’m only realising this now. I guess you’re not mad at me anymore right,  because I think I just literally made our lives like a million times better, in fact I think the best thing I’ve done all year is breaking that TV. Yup. I’m actually kind of a hero aren’t I..”

a) The walls are brick, and there are no windows, a solitary hanging light bulb swings from the ceiling illuminating the space. In the middle of the floor there is an open pizza box, inside of which is a little unmade bedspread. One or two empty crisps packets and candy wrappers are scattered around the room and it doesn’t look like it has been cleaned or tidied in months, the carpet hasn’t been vacuumed in ages and there are spider webs in the corners of the room, and the walls feature the odd funny-coloured splatter. There are a couple of posters stuck on the walls which add a bit of colour to the otherwise drab room. There are also a few interesting items around the room, and on the one shelf that is fitted a few inches from the ground. A magic eight ball, a toy car, a movie stub, a calculator, a fork, army men, a roll of tape, a stick of lipstick, a pet rock, some cd’s, a cookbook and a cuddly teddy bear to name a few. The room is an interesting mix of mismatched items and bits and bobs that have been collected together and displayed proudly for any visitors.

b) The walls are brick and there are no windows, a solitary broken lightbulb hangs from the ceiling. In the middle of the floor there are a few fast food boxes, inside each one is little bedspread. There are empty food wrappers piling up in one corner and beginning to smell. The room doesn’t look like it has ever been tidied or cleaned properly! There are suspect stains everywhere from what looks like numerous food fights. There are a couple of posters, with noticeable wear and rips in them.  There are some interesting items displayed on a few shelves which are mounted close to the ground, and the room is an interesting mix of strange and ordinary items that are found around the house, they are not displayed with much care, and appear to be shoved together as the collection has grown.

The disruption could be another object brought to life come crashing into the basement, with the news that the superhero (that brought them all to life) is in trouble and they need to do something! What will we do? Then our hero pizza slice steps up and suggests they go to save him – while the other character respond to this (like are you kidding? you?! save anything? you’ve never even been outside!! etc..) We will learn that he is not afraid and even if he was he wants to do the right thing – he also wants to be a hero like dad.